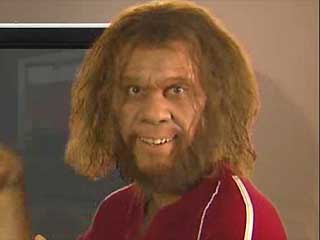 Very likely, this ad rang a bell with the people who were doing the buying. And if TV people are anything like the stereotypes, these tedious, hairy dudes ring the rapport bell there, which is how they nearly made it onto TV.
Posted by Jeff at 12:16 AM No comments:

I've worked in advertising for over 15 years. I love it and I hate it. I've worked nearly every aspect of the job on the creative side: design, production, retouching, copy writing, studio management, I've even been involved in account management. Over the years I've met some very cool people & good friends, but also some major assholes and really toxic individuals, excellent clients and dreadful ones, and encountered some crazy stories that sound more like bad sitcom plots--except they really happened!

I've also seen the character of the industry change, and the quality of the output, change and NOT for the better. After reading endless, glowing reports in the trade mags, with enough superlatives in 'em to give me diabetes, I started to wonder if any of these writers ever really even worked in the industry. Don't get me wrong, there's a lot of great stories out of the industry, but some of these magazines are really just painting over the roaches.

I wanted to create a forum where I can spout off my curmudgeonly rants, and open it up anyone else with an opinion--yea or nay.

So come on in, I'll tell it like is it, if you promise to do the same thing.
Posted by Jeff at 9:47 AM No comments: